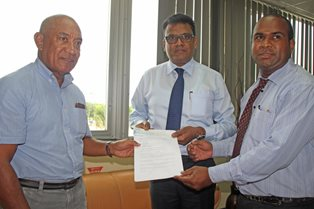 A local subsidiary of an international conglomerate has extended assistance of $10,000 to aid Government’s restoration efforts in the aftermath of Tropical Cyclone Winston.

Mr Raimuria said the company, which is a local subsidiary of IXOM, had seen the devastation that TC Winston had on the Fijian economy.

“Our company is looking at the devastation caused by TC Winston which means we are duty bound to assist our fellow Fijians in this time of need,” he said.

“At the same time we are supporting the Fijian Government in their recovery plan to restore life back to normalcy for the Fijian community,” he said.

Mr Raimuria said through this they had brought smiles to the lives of 2,270 individuals.