The Fiji-China relationship is one that has been built on great respect and genuine kindness that remains constant to this day.
Spanning more than four decades, the friendship between the two countries has never waned, with our nations bonded by a common and steady recognition of the mutual benefits of bilateralism.
Prime Minister Honourable Josaia Voreqe Bainimarama made the remarks while officiating at the 70th anniversary of the founding of the People’s Republic of China at Suva’s Civic Auditorium on Sunday morning (8th September, 2019).
“Today bears extra special significance, as we also mark 44 years since the establishment of formal diplomatic relations between Fiji and China in 1975,” he said.
“I thank the Chinese Government for its work towards a cause that we in the Pacific prioritise above all else, and for its assistance in adapting our economy here in Fiji to be more resilient to the ravages of a changing climate.
“For as we gather here to mark 70 years since the founding of the People’s Republic of China, I know you are committed to ensuring the next 70 are not stained by inaction, but filled with inspired hope for the future of our planet”. 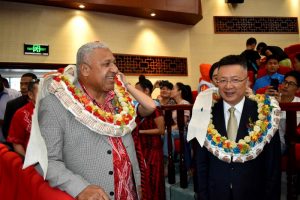