After independence, the Chief Minister’s Office which is what the Office of the Prime Minister was called at that time, served the public with a handful of staff. The late Ratu Sir Kamisese Mara was the first Prime Minister with Mr. Robert Sanders serving as his Permanent Secretary and Secretary to the Council of Ministers (or Secretary to Cabinet). 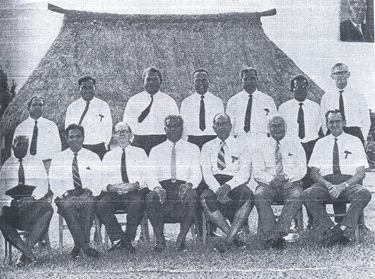 Caption: 1972 Cabinet after the first elections under the 1970 Constitution.

Below are Fiji’s former Prime Ministers and the terms they served: