Honourable Bainimarama, at the meeting, commended Australia for its ongoing commitment to the climate change process. He said it was important to remain engaged in the work to fully implement the Paris Agreement. He also reiterated that the achievements at COP24 established a strong platform towards finalising the remaining elements of the Katowice package, particularly the guidance on voluntary cooperation and market-based mechanisms.

As Australia gears towards its federal elections on May 18, Honourable Bainimarama said he is paying close attention to the debates and views on climate change in the current political campaign. At the meeting, the Honourable Prime Minister reinforced Fiji’s priorities, stating that it remains unchanged. The focus is on urgent need for more action on the ground as well as for countries to submit their new or updated NDCs, which should reflect the highest ambition. The discussions was also focused on the upcoming 4th CAPP meeting scheduled to be held in Suva from 13-14 May 2019.

Honourable Bainimarama, through Ambassador Suckling extended his gratitude to his Australian counterpart, Prime Minister Morrison on the support rendered to the activities under the EP-CCP within the scope of the Fiji-Australia Vuvale Partnership. The Prime Minister shared his hope that the Insurance facility for the Pacific would also be included in the partnership.

The Honourable Prime Minister also discussed the Ocean Pathway at Blue COP with Ambassador Suckling. Honourable Bainimarama said several talanoa events have been held around the world to engage with friends and the wider stakeholders on the Ocean Pathway and he hoped to see this issue embraced at COP25 by all Member States. He said Australia’s ongoing support in this endeavour would be vital.

The Honourable Prime Minister took the opportunity to sincerely acknowledge Australia’s support to Fiji and looked forward to working closely with Australia in preparation for COP 25, in the Ocean Pathway and future work on Climate Change. 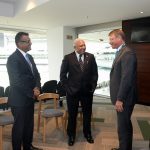 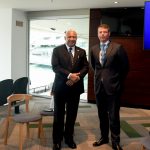